Fujifilm launched another of their heavyweight camera the Fujifilm X-H1, and I was at the event at CHIJMES on 9-Mar-2018 to witness the launch. xavierlum.com was there to give you an event coverage. For those who didn’t attend, this is what they didn’t tell you.

Strangely, the camera was on sale in Singapore on early Mar 2018, Fujifilm X-H1 launch event was pretty late for consumers.

Here are some of the summary I have for you, the event started from 7 pm till 10 pm, it was an intense two hours of preaching from Fujifilm representatives in the chapel before the audience got their hands on the camera for one hour.

The local marketing manager gave a head start for the event; you don’t expect any dramatic music intro entrance from the start. Kind of like attending a sermon on TGIF.

Perhaps the CHIJMES has a high ceiling, so the speaker’s voice dispersed thinly to the hall ceiling, the audience sitting at the rear had quite a hard time listening to the speech clearly.

Next speaker was Mr Keitaro So, regional marketing manager, where he introduced the features of the Fujifilm X-H1. These are some of the keynotes.

Speaking of which, my X-T2 had a bad fall from the tripod, both body and the 10-24mm lens separated instantly. It will cost a bomb to send the camera to the local service centre; since my camera is an export set, luckily I found one place that repairs cameras at an affordable price.

The X-H1 and X-T2 share the same sensor, apart from that the X-H1 equip with image stabilisation (IBIS) mechanism built-in. In my opinion, it doesn’t serve you the significant advantages if one does not know basic camera technical handling.

The FUJIFILM X-H1 equipped with the new feather-touch shutter button that can respond to delicate shutter release actions to capture all photographic opportunities. When combined with the firm-hold design of the grip, the shutter button controls camera shake for fast-response operability. (copied)

In my opinion, I feel that I was operating my old X-T1, and I hate that “soft” feeling (It is more about personal preference)

Mr Keitaro So said that your eyes get tired quickly when you look at vivid videos for long hours. With the “ETERNA” mode, it means that you don’t have to bring down the image and video saturation during post-processing.

Before Singapore’s GST raise to another 2 percent (don’t ask why – say sorry first; political joke) Mr Keitaro So introduced two cinema lens to most of us ( photographers on the floor ), the MKX18-55mmT2.9 and the MKX50-135mmT2.9, priced at approx. SGD $5,999.00 each. I was reaching for my wallet, but it was hollow.

Fujifilm claimed that they are making film lens affordable compared to other brands, but I feel that they could introduce those lenses to movie makers like Steven Spielberg. Not a commoner like me.

I used a lot of brain juice to understand and process Keitaro’s strong Japanese accents, I wish FujiGuy Billy was there.

No breaks no intervals, the clock struck 8, I was lucky to grab a bite at the Macdonald’s before coming to this event, so I don’t get “hangry”.

Two more X-photographers Derrick and William took the stage one after another to share their Fujifilm X-H1 experience. Both were pretty good at Wedding and Portraits but not good at talking; again I survived both weariful speeches. Their contents were similar; I hope Fujifilm Singapore had roped in Wildlife, Landscape photographers to promote this camera.

One X-photographer said that Fujifilm X-H1 was so silent and sleek that he captured some shots at close range without the subjects noticing him. Maybe he is master of voyeurism, or the models are visually impaired?

The guest speaker Nicolas Chee, a professional producer and director of Flying Kick Asia aired his view of the camera and shared his short video using the Fujifilm X-H1. Before Nicolas ended his speech, he showed a slide and got me up from my seat and took a snapshot.

What Nicolas dislike about the Fujifilm X-H1 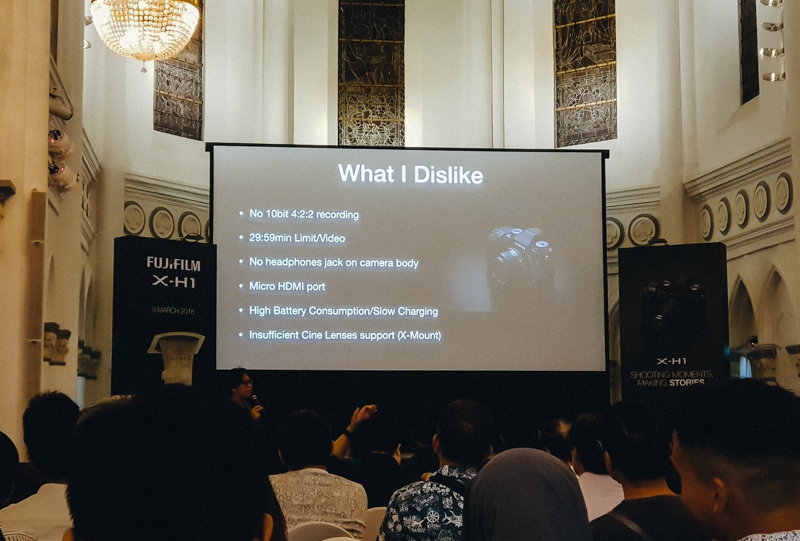 From evolution to revolution, the catchy slogan from Fujifilm. Fujifilm made such surpassing street, and portable cameras like the Xpro-1, X100, or even the X70 that made a lot of professional photographers and hobbyists enthusiasm enjoyed photography; the Fujifilm X-H1 is not my cup of tea.

Lately, somehow Fujifilm had diverted their directions to the professional market, with the medium format camera and filmmaking camera.

With GFX and X-H1, the hefty price tag and lack of X-mounts lens, and so many “Kaizen” to work on, is Fujifilm a brand you should consider for your professional work? 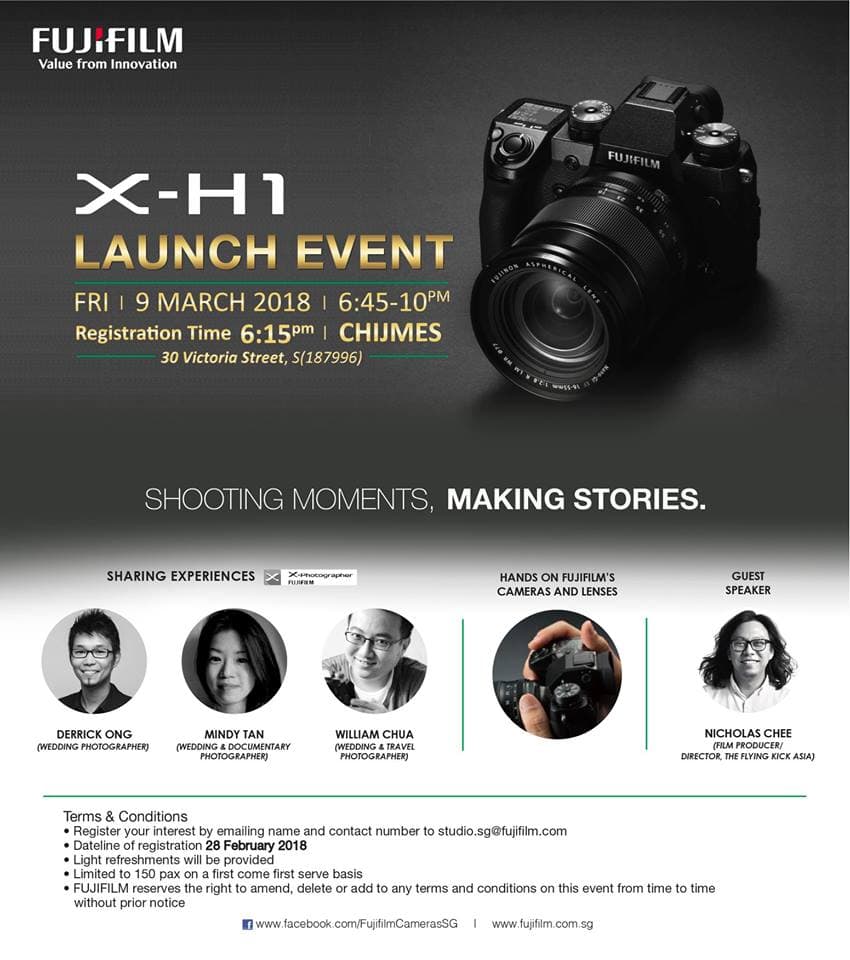